Arrived home safely if not sanely

I was sorry to see the end of Ad-Astra. I had a great time on the panels and the ChiZine reading I took part in — pretty funny to see six authors try to read in an hour, but we pulled it off with time to spare! It was lovely to see some old friends and meet some new ones and just to generally soak in the amazing creativity that was everywhere — the events, the costumes, the questions and answers, the readings, the games, the dealer booths, etc. I’ve actually been trying to do less events as I focus on my writing and family, but damn, Ad-Astra kind of made me want to do more!

The airport part drained me, though. The pic above is from the underworld of Pearson airport, where I found myself wandering aimlessly for a time while searching for a flight. I felt like Sisyphus….

The Apocalypse is here!

The author copies of The Apocalypse Ark arrived today! They are strangely wet and smell of Kraken rum, but they are here!

Hey neighbour, can I borrow a cup of kickass fantasy?

I’ve long been a fan of Sebastien de Castell and his Greatcoats series, which started with Traitor’s Blade, so I got a kick out of sharing some Amazon bestseller space with him. He’ll never let me live it down that he beat The Apocalypse Ark, though….

If you want to learn more about Sebastien and his kickass fantasy series, check out the interview and podcast I did with him at The Province, where he talks about moving from the barista lifestyle to the rich and glamorous life of a plumber after signing an eight-book publishing deal (it’s all explained in the interview).

Late in The Apocalypse Ark, there’s this real twist where….

Yeah, this is probably the point I should talk about spoilers.

I have a spoilers story I always like to tell people.

A couple of years back, I was watching a season of The Walking Dead on Netflix. I have two children, a full-time career in the media, and I try to write when I can, so I don’t tend to watch things when they first come out. I usually get around to it a year or three later. So I was catching up on the episodes of The Walking Dead that everyone else in the newsroom had already watched.

You can see where this is going.

I mentioned to the photo editor that I had just started Season 2, which focuses in large part on the survivor group’s attempts to find a girl who was separated from the others by walkers early in the season.

“Oh, that moment where she drives the ice cream truck into the house had me crying!” she said.

OK, that’s not really what she said. I’m not going to tell you what she said, because spoilers. Some of you may not have seen it yet, like I hadn’t when she told me what really happened with the missing girl.

A great deal of the season’s drama arises out of the characters’ search for the missing girl. Where is she? Will she ever be found? Did the walkers get her? Etc. The whole season, as I watched the drama build, I could only think: “She’s in the ice cream truck. Just listen for that unholy jingle and track her down.” Well, that’s not exactly what I was thinking, but you know what I mean. All the anticipation and excitement and anxiety and everything else of the season was lost for me because of that one slip by a colleague.

Of course, when I mentioned that to my other colleagues, they thought the situation was quite funny and now they openly discuss plot twists and turns around me whenever they can. It’s enough to make me watch House of Cards instead. There are no surprises there, right?

Anyway, this is a long-winded way of saying I have a new book out and please don’t give away the secrets. No spoilers! Unless the person you’re talking to wasn’t going to buy the book anyway. Then they deserve to have their day ruined.

The same day The Apocalypse Ark received that wonderful Vancouver Sun review, it also got a fun review at Publishers Weekly. Hard to beat comments like this:

The Cross series is a spiritual relative to Richard Kadrey’s Sandman Slim and Lavie Tidhar’s Bookman series, meaning that anyone (and anything) in the literary universe is fair game. Mythological beasts, Lovecraftian allusions, pirates, and characters from Moby Dick and Twenty Thousand Leagues Under the Sea all fuse together to form a vastly entertaining, fantastical, breakneck hodgepodge quest novel that has the good sense never to take itself too seriously

“One of the strongest, and strangest, literary creations this country has ever seen” 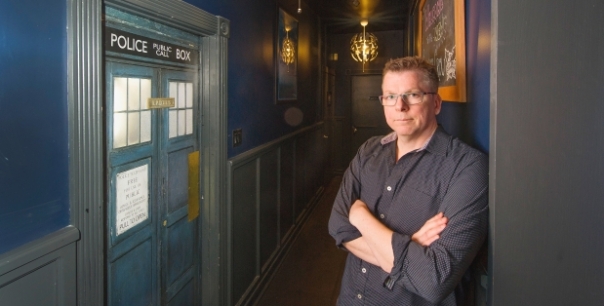 I will just say that I am deeply pleased to read this review of my latest Cross novel, The Apocalypse Ark. It’s nice to have a reader that gets what you’re trying to do.

Roman (a pseudonym for Vancouver Province journalist Peter Darbyshire) writes with the unfettered delight of a gluttonous reader trapped in a library in his own mind, drawing promiscuously from myth, folk tale, religious texts and apocrypha, literature, music and philosophy — seemingly anything that catches his attention. A Cross novel, at a quick glance or description, seems like an absurdist piece of outsider art, shiny objects thrown together in a fit of barely checked mania.

Anyone who has read a Cross novel, however, knows the truth: despite their crazed, iconoclastic appearance, Roman’s novels are skilfully wrought, thematically deep, with a philosophical depth and a keen sense for both story and its implications. They’re smarter than they would need to be, were they mere action novels, with a sense of literary intersectionality and deep, canonical knowledge most closely akin to writers like Neil Gaiman, Bill Willingham and Mike Carey, graphic novelists all, and three of the finest storytellers at work.

Special thanks to the Storm Crow Alehouse in Vancouver for the photo shoot! I will be back for the Dungeon Burger!

21 leagues under the sea

The Apocalypse Ark has only been out a few days in Canada — I still don’t have copies of it myself! — but it managed to hit No. 21 on Amazon’s Historical Fantasy Kindle charts today. It also hit No. 8 on the Occult charts but I’m a little nervous about posting images of that for fear of breaking the seventh seal, etc.

Thanks to everyone who bought a copy of the book! I hope you like it! 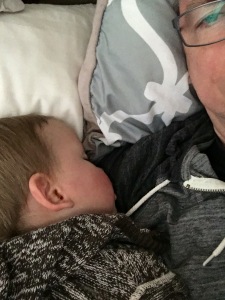 Today was a rough day spent cuddling a very sick little boy. As the doctor said, “Oh yeah, you smell like vomit.” It was all made better, however, thanks to Robert J. Wiersema’s wonderful discussion of my Cross series of books on the CBC’s All Points West show. My favourite line: “If you like your literature with a nitro feeling, you’ll love these.” What a great welcome to the world for my new book, The Apocalypse Ark. Now to do something about this vomit smell….

(Reposted from my Facebook feed because it’s hard to get anything done when you’re cuddling a little boy in one arm.)

The Apocalypse Ark has launched!

The Apocalypse Ark, the third book in the Cross series, has set sail! Well, it just published in Canada, anyway. It’s coming soon to other parts of the world. If we don’t all drown in a rain of fire and blood first, that is. We have it coming, after all. Don’t ask why — you know what you did.

Here’s what some of the early reviews have had to say:

If you’re new to the Cross series, here’s the basic premise: Our poor narrator, Cross, woke thousands of years ago to find himself in the body of Christ after Christ shuffled off this mortal coil. He has all the powers of Christ but none of his sensibilities — Cross is a drunk, thief, mercenary and all-around rogue. He’s about as fallen as you can get, the type of person who usually winds up dead in a back alley somewhere. Cross does end up dead a lot, but every time he dies his body resurrects him. There’s a catch, though: he needs the heavenly grace of angels to fuel his powers, and the only way to get that is to kill them. Needless to say, he’s not very popular among the angels left behind on Earth.

The first book, The Mona Lisa Sacrifice, follows Cross’s attempts to track down his old nemesis Judas, a trickster god dedicated to destroying humanity — and who is responsible for the deaths of Cross’s one true love throughout the ages, Penelope, and their unborn daughter, Amelia. It spans the centuries and the globe and leads Cross into the middle of a war between the angels. It was an Amazon.ca No. 1 fantasy bestseller and did all right in other parts of the world, too.

The second book, The Dead Hamlets, sees Cross caught in the middle of a murder mystery, as a mysterious ghost with ties to Shakespeare is killing off members of the faerie court, who live in secrecy among the humans. The next victim may just be Amelia, Cross’s dead daughter that the faerie queen stole from the grave and birthed to torment Cross (they have a history). Cross must discover the ghost’s secret to stop the murders, but what he finds may mean even his end.

In the third book, The Apocalypse Ark, Cross faces his most dangerous enemy yet: Noah. For ages Noah has sailed the seas, seeking out all of God’s mistakes and imprisoning them on his ark. Noah is not humanity’s saviour but is instead God’s jailer. But he has grown increasingly mad over the centuries, and now he is determined to end the world by raising the mysterious Sunken City. Only one person can stop him: Cross.

I’ll be posting more about The Apocalypse Ark and its origins in the days to come. In the meantime, I’ll just leave these links here in case you’re interested….

(Yes, I know the photo shows a giant squid attacking the Nautilus from 20,000 Leagues Under the Sea, not an ark. Trust me — there’s a connection between 20,000 Leagues and The Apocalypse Ark.)

Are you ready for the Apocalypse?

Some of you may be wondering when my new Cross novel, The Apocalypse Ark, will be released. Just keep an eye on the weather. As soon as it rains for seven days straight and the streets start flooding, then open your window and shout “Release the Ark!” in your best “Release the kraken!” voice.

Or you could just wait a few weeks.

The Apocalypse Ark was originally due to be published in January but it got pushed back a bit during the editing process. No one at the publishing house liked those chapters I wrote from the fish’s point of view, so I had to go back and rewrite everything. Sheesh. No, in all seriousness, it was just life with two young sons and a day job (boooooo!) meant it took me a little longer to get through the revisions than I initially thought. Also, I kept endlessly revising, until my editor threatened to harpoon me and mount my skull over the transom as a warning to other writers.

The Apocalypse Ark will likely be released in Canada in late February. The U.S. release will likely be late March or early April. Because April is the cruellest month. I’m not sure about other countries — check your local book emporium. Those book monks know everything!

But you don’t have to wait to pre-order it — you can give me your money now! In exchange for nothing but some vague promise that I’ve written a book. Sounds legit to me. Please send your life savings to:

Remember, what would Noah do?