I was introduced to the game Forbidden Island last year and I quite enjoyed it. The game is simple enough: you and your friends or family members are a group of explorers who become trapped on a mysterious sinking island. You must collect four artifacts before you can escape, but it’s not an easy task as the different parts of the island get flooded. Each of the characters has different attributes — the Pilot can fly anywhere, the Diver can move through flooded parts of the island, etc. — and you must work together flawlessly to succeed.

The game is the perfect mix of simplicity and playability. The rules are few and straightforward — you do little more than moving, shoring up parts of the island and trading artifact cards — but the game is always different thanks to the tile board setup. And the ever-increasing amount of water adds great tension to what is really a quick game.

The cooperative nature makes it a great family game, as you must work together rather than against each other. In my household, competitive games don’t go over so well, so this was a great find for me. I bought the app game, as it was cheap, and we have enjoyed a few family evenings playing it.

Plus, there’s the great imaginative play of the game. When I play it, I can picture moving through a Jules Verne/Myst like city, as water slowly rises around my ankles. It’s like playing the idea for a book. 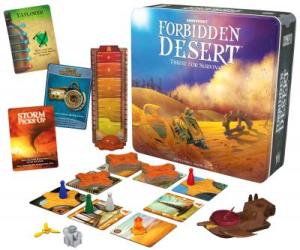 When I heard there was a sequel, Forbidden Desert, I was very excited. And lo and behold, I received it for Christmas. It’s a great complement to Forbidden Island or even a great stand-alone game. Best of all, it follows the same simple yet playable formula without repeating the original game too much — it has enough new features to feel like a brand new yet familiar game.

Forbidden Desert features a group of intrepid explorers crash landing in the desert atop a mysterious city as a sandstorm blows. Their only hope is to find the different parts of an ancient flying craft so they can reassemble it and escape the city before the sandstorm buries it. It’s the same basic formula as Forbidden Island, with a few twists: the sand is constantly burying the city and moving the tiles about, as the storm covers and uncovers different parts of the city. The characters are different, with different abilities — I like the Meteorologist, who can spend action points delaying the storm or seeing what’s coming next. It’s even more cooperative than Forbidden Island, as you’ll need to end up sharing water and solar shields and so on.

Both games are delightfully playable and admirably simple — if you don’t believe me, just check out the photo of my four-year-old playing the game with me. He’s already planning the sequel — Forbidden Mountain! I’d be delighted to play that one.