If you like your daily literary and culture news with a twist of the knife, Bookninja is back.

Some of you may remember when George Murray and I started up Bookninja many years ago to talk books on a more or less daily basis. I eventually left to focus on my own writing and because I had kids. Who has the time to do anything on a daily basis when you’re a parent? George grew Bookninja to global infamy on his own before he shut it down himself to also concentrate on his own life. His kids must be grown up now or something, because he’s started up Bookninja again.

Here are George’s comments on the resurrection of the ninja:

Over the last couple years, though, I realized that the unmitigated dumpster-fire known as “The Literary World” had driven me completely underground. I could barely read the news, much less comment on it. I hate living like that.

Recently I realized that when my kids ask me what to do when they feel out of place or under siege by life, I say things like: “Well, then create your own space” and “Time to sally forth with your troops and break the siege.” Which kind of makes me a hypocrite for hiding for seven years.

Further, I feel like I was always out of the loop in terms of what’s happening in the world. Bookninja gave me a chance to go out and seek out daily news that I was interested in.

So, this is me not being a hypocrite anymore. And me trying to “get out” more.

Give Bookninja a follow if you haven’t already. I think you’ll like it. Maybe if enough people start reading it George will make more comics. 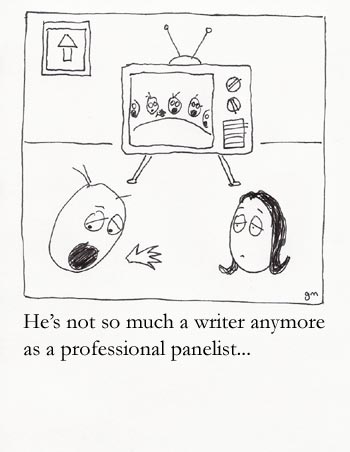 Posted on September 14, 2019, in Shrapnel and tagged Bookninja, George Murray. Bookmark the permalink. Leave a comment.