← Every story is a miracle, really
Who says miracles don’t happen? →

King of Tokyo: Or how I learned to stop worrying and love my extra head and poison quills

Do you like movies about giant monsters smashing puny cities and their even punier inhabitants? Do you like board games? Do you like the idea of snorting strange little green cubes for bizarre power-ups like extra heads and poison quills? Then you’ll love King of Tokyo.

Promo copy for the game:

Play mutant monsters, gigantic robots and other monstrous creatures, rampaging the city and vying for position as the one and only King of Tokyo!

Sounds like good, clean, silly fun? It is. I’ve played King of Tokyo many times and it’s become my go-to game (although Forbidden Island and Forbidden Desert are still close seconds). It’s fun, it’s quick and every game is different thanks to the card and dice mechanics. Best of all, it’s simple without sacrificing strategy and tactics. In fact, you have to think through a strategy for your monster based on the random dice rolls – and that strategy can change quickly as you move about Tokyo. 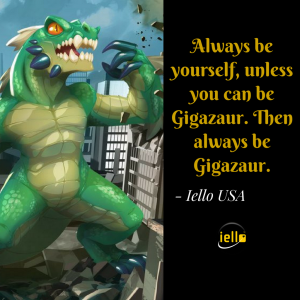 The premise. You’re a horrible monster who wants to make Tokyo your own little sandbox of destruction and, well, destruction. That’s not a problem, given you’re a fearful creature such as the deranged Space Penguin, the malicious Cyber Kitty, the reptilian Gigazaur, the Godzilla-esque Mecha Dragon, the alienated Alienoid and the not-at-all-infringing-on-copyright-giant-gorilla The King. The problem is all the other monsters want to make Tokyo their own. The only choice is to fight it out.

The battleground is simple. A small board with a rendering of Tokyo in flames, and a red circle on the map to mark the home of the current King of Tokyo (plus another circle for Tokyo Bay for games with 5-6 players). The battle rules are also simple: roll six dice marked with various numbers and icons that allow you to attack, heal, earn energy cubes to buy special powers or collect victory points – first one to 20 wins! There’s a surprising amount of strategy involved in the dice rolling part of the game because you’re actually allowed three rolls. After the first roll of six dice you can reroll any number of them to build toward a goal for that turn – and the same goes for the third roll. So let’s say you’re badly wounded (all the monsters have limited health). You roll six dice and get three hearts, a 1 and two energy symbols. You keep the hearts and reroll the other dice and get another heart and two energy symbols again. Now you keep the four hearts, which is pretty good for a heal, and roll again because you’re pissed off about being wounded and don’t want to spend your time collecting energy. Two claws – great! You heal and wound your enemy!

The strategy can go any way you want. Maybe you want to collect energy cubes so you can buy cards that give you special powers – like the zombie costume that allows you to keep playing even after you’re dead (death normally results in a loss for you, but not always), or the wings card that allows you to escape Tokyo without taking damage.

What’s that? Escape Tokyo? But isn’t being king of Tokyo the point? Yes, but it’s not that easy. Some complicating factors: When you are in Tokyo, your attacks affect everyone outside of Tokyo. Yay – massive, wrecking damage! Also, when you’re in Tokyo, everyone’s attacks from outside of Tokyo affect you. Boo – massive, wrecking damage! On the plus side, you earn two victory points every turn you occupy Tokyo, so it doesn’t take many turns in the red circle to win the game. Victory is mine! On the other hand, you can’t heal when you’re in Tokyo. Death! Sweet, sweet death….

The games usually feature monsters stomping in and out of Tokyo, savaging their opponents and getting savaged, retreating to heal, then charging forward all over again. Thanks to the cards, every game is different – oh look, Space Penguin has an extra head and a robot suit while Mecha Dragon has poison spit and a giant brain….

If you ever get bored, there are plenty of expansions – I have the Halloween pack for King of Tokyo, which features two new characters, Pumpkin Jack and Boogey Woogey, plus evolution cards and new costumes. I also have King of New York, which adds to the basic game by introducing buildings and army units to be smashed by the monsters – and six new monsters!

I’ve played King of Tokyo with adults and young adults, who like the game just fine. My life being what it is, though, I rarely get out of the house for fun so I end up playing with my sons, 8 and 3. The eight-year-old loves the idea of wrecking cities and blasting his dad to death. The three-year-old just wants to roar and smash things. We play special rules with him, where he is only allowed to attack and heal and forget the strategy stuff. That makes him a real force of destruction – just like in real life, but with fewer trips to the ER.

So if you’re looking for a new game, check out King of Tokyo. Destroying the world hasn’t been this much fun since that book I wrote.

Posted on July 5, 2018, in Journal, Lifestream and tagged King of Tokyo, lifestream. Bookmark the permalink. Leave a comment.

← Every story is a miracle, really
Who says miracles don’t happen? →